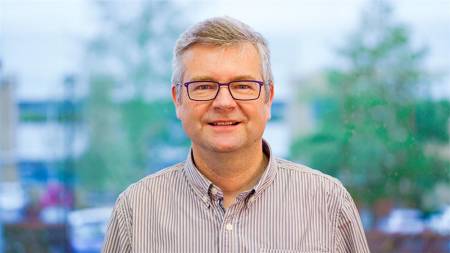 In conversation with John Biggs from Arm

Pragmatic were proud to see Nature publish a paper about the ground-breaking PlasticARM, the largest integrated circuit designed using our FlexIC Foundry® service. This is the result of many years of cooperation between Pragmatic and Arm. We caught up with John Biggs (Distinguished Engineer and Co-founder of Arm) to learn about the journey to reach this point.

1) When did you first get involved with Pragmatic?

John: It was back in November 2013. James Myers, who leads the Devices, Circuits and Systems team at Arm Research, asked me to have a look at the possibility of implementing a Cortex-M0 in plastic. Scott White (CEO of Pragmatic) had been talking to Mike Muller (CTO Arm, at the time) earlier in the year and Mike was very excited about the possibility of creating a low-cost, flexible Arm processor.

2) What were the different stages of the project?

John: As a 32-bit microprocessor was quite a stretch for the state-of-the-art in flexible electronics back then, we decided to start by making some simple prototype circuits such as ring oscillators, counters and shift register arrays. These prototype circuits were very successful and so, with Mike’s encouragement, we made the bold decision to have a go at building a PlasticARM in 2015.

Although Mike was able to show a wafer with the PlasticARM at TechCon in 2015, (news article) unfortunately, despite several attempts, we could not manage to produce a fully working part at that time and so put the project on the back burner whilst we focussed on a different project – PlasticArmPit.

When the FlexLogIC® fab-in-a-box manufacturing system came on-stream we decided to have another go at making a PlasticARM, and on 27th October 2020 we produced the world’s first fully functional non-silicon Arm processor.

3) What challenges did you face?

John: Initially, we had some language/terminology issues rooted in the fundamental differences between the silicon-based transistors and this new world of thin-film transistors on a flexible substrate.

However, as we got to know each other and understand each other’s requirements and constraints better we were able to begin the interesting process of “Design Technology Co-Optimisation” (DTCO). This involved making informed decisions at every level of the implementation flow from the routing grid and via overlaps down to the standard cell architecture and process design rules.

A lot of this DTCO took place in the PlasticArmPit project whilst PlasticARM was on pause. However, as PlasticARM was able to use the same cell library, tool flow and process technology, it benefited from all the same improvements.

4) Why is this PlasticARM remarkable?

John: Although PlasticARM is an ultra-minimalist Cortex-M0 based SoC (system-on-chip) with just 128 bytes of RAM and 456 bytes of ROM – it is nevertheless 12x more complex than previous state-of-the-art flexible electronics! It is featured in a joint technical paper in the latest Nature publication “A Natively Flexible 32-bit Arm Microprocessor”, which demonstrates how much of a step forward it is for this area of technology.

As ultra-low-cost microprocessors become commercially viable, all sorts of markets will open up with interesting use cases such as smart sensors, smart labels and intelligent packaging. Products using these devices could help with sustainability by reducing food waste and promote the circular economy with smart lifecycle tracking. However, I think the biggest impact may be in healthcare – this technology really lends itself to building intelligent disposable health monitoring systems that can be applied directly to the skin.

5) What is the future of this technology?

John: Good question, I hope that flexible electronics will continue to evolve rapidly and follow a similar trajectory to Moore’s Law for many years to come. The next challenge is to address the static power consumption issue of today’s unipolar technology, to allow even more complex circuits to be designed, enabling more memory, sensors and other components to be embedded. The potential for this technology is huge and far-reaching – then almost any object can become “smart”, catalysing the “Internet of Everything”. We see this technology being embedded in many everyday items, for example food packaging, where it could help reduce food waste or enable recycling, as well as verifying the provenance and quality of the ingredients. It could also be used in healthcare applications, such as smart bandages, that will improve health outcomes and wellbeing for many people around the world. Another area we are seeing a lot of interest at the moment is how technology can accelerate the move to a more circular economy for price-sensitive goods that is simply not achievable with conventional silicon-based electronics. This is the start of an exciting new chapter in electronics, and I am sure we will find many new use cases for this technology that will benefit people and our planet.