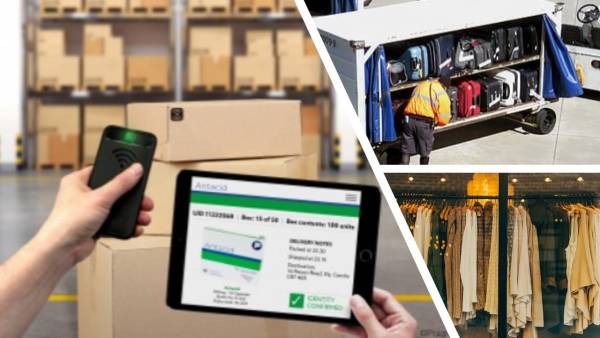 RFID stands for Radio Frequency Identification, which is a technology that allows objects to be uniquely identified using a tag or inlay attached to the object. This identifier can then be read remotely with the data being transmitted using radio waves.

RFID has a long history. It emerged from RADAR, which was developed in the1920s, gaining traction in transportation systems, animal tracking, and other applications in the 1980s. In the early 2000s retail companies began to experiment with the technology for stock control purposes. This was possible because of two advances. Firstly, the development of higher frequency (“UHF”)devices, which had longer read range. Secondly, the formation of the Auto-ID centre in Massachusetts Institute of Technology to store the assignment of UIDs, ensuring that they were truly unique. Over the last twenty years the technology and systems have improved, and costs have fallen significantly, encouraging more brands and retailers to adopt the technology. The next step will be to tag individual everyday items, but in order to do that there needs to be a step change in price, which is now possible with the latest developments in ultra-low-cost flexible integrated circuits (FlexICs).

The key components of a typical RFID system are shown below:

The simplest RFID tag consists of a chip, or integrated circuit (IC), which stores a unique ID (UID), and an antenna for data transmission and energy harvesting. More complex tags, described later, can include batteries, sensors and displays.

In this paper, for simplicity, we use “tags” as the common name for all RFID transceivers that are attached to objects. In other sources, generally “tag” is used for those that are encapsulated in some way, e.g. a hard plastic, weatherproof container; and “inlay” is used to describe very thin transceivers that are placed under labels or inside a layer of packaging, or in an apparel hand tag.

One major advantage of this technology is the tag does not need to be visible for a reader to capture the stored information and therefore it can be embedded under the label, or inside a package. This is important for brand owners as it frees up valuable space on the label/packaging that would be occupied by a barcode say.

An RFID reader is used to collect the data stored on the RFID tag. A reader maybe a standalone handheld piece of equipment, or an attachment to a smartphone, or even the smartphone itself in some cases. The reader sends the data to application software, largely in the cloud these days. It is this software that determines what can be achieved by tagging all the objects. For example, in a retail environment, it could be used to keep track of all the stock across the entire network of a company’s shops, warehouses and transportation network, which is becoming of paramount importance in today’s omnichannel world.Another example is to validate the authenticity of an object at all stages of its journey from manufacturing to the end-user.

The rest of this document will focus on the RFID tag itself and give an overview of the different types of tags and some of the applications they are used for.

What is an RFID tag?

As mentioned earlier, the simplest RFID tag includes an integrated circuit (IC), an antenna and a power source. The IC is the brains of the tag that stores the data. It is connected to the antenna, which transmits and receives data via radio waves. Power for the IC can be provided either by an RFID reader or a battery.

There are three main types of RFID tags, as described below:

With a passive RFID tag the power source is the energy harvested from the incoming signal from the RFID reader. That means that the antenna does notonly capture the data that is sent by the reader, but it also converts some of the energy from the radio waves to power the IC.

The amount of power that can be generated in this way depends firstly on the reader output power. Standalone readers, or readers that are attached to smartphones, usually used for UHF RFID, generally have higher output powers than smartphones for example. And also, on the application, long range (retail, stock taking) vs short range (payments, keys, customer engagement). The power emitted from a source falls rapidly with distance, so the closer the reader is to the tag, the higher the incident power. But in both long- and short-range passive tags, the amount of power harvested is low – in the range of microwatts to milliwatts. The implication of this is that the tag has to be quite simple and cannot support a lot of functionality. It goes without saying that as the passive tag requires the presence of a reader to power the IC, when there is no reader, the IC is off, which means that the data has to be stored in a type of memory that retains the information even if the power is down, called non-volatile memory. It also means that the tag can do nothing in this state, therefore cannot be used for continuous monitoring of an object (“data-logging”).

Battery assisted passive (BAP) or semi-passive tags, as it says on the tin, are passive RFID tags with an internal battery as their power source. The BAP tag is still a passive tag as it always waits for the reader to ask it to transmit and only then wakes the battery to power the tag.

The biggest advantage of BAP tags is they have a higher RF power output and so can transmit signals over a longer range. The battery can also be used to power additional functionality in the tags, for example additional memory storage, and sensors for temperature, humidity etc.. Usually the batteries in BAP tags are not replaceable.

Active RFID tags also have batteries. The difference is that an active tag can transmit data either with or without waiting for a reader. These are usually the most complex RFID tags that can include significant amounts of read/writeable memory, multiple sensors, real time clocks and display elements. The batteries inactive tags may be replaceable.

There are three basic types of active tags. A “beaconing RFID” tag basically transmits its stored data at regular intervals. This type is useful if the owner simply wants to know that something is within range, but not its exact location, e.g. tools in a workshop. In some application areas this is now being done using Bluetooth Low Energy (BLE).

A “transponding active RFID” tag, like a passive tag will wait for a reader to poll it, during which time it will sit in a very low power mode, but when woken, it can respond at high power. The most common use case for this type of tag is for toll roads.

Finally, an “intelligent active RFID” tag is a hybrid, mostly used for data-logging applications. The tag can sit in a low power mode, then periodically wake, sense its environment, store the data, maybe even take some decisions on that data, and also listen for readers in the vicinity and transmit if asked. If it is sitting within a field of readers with known locations, it could also triangulate its position. Therefore, this class of active RFID tags offers the most sophisticated, time and location-based data sets.

Another way of categorising RFID tags is by frequency. There are three frequency ranges in which they operate: low frequency (LF), high frequency (HF)and ultra-high frequency (UHF). If all things were equal, we would expect the lower frequency RFID signals to be able to travel the furthest, but as we have seen earlier, the strength of the RF signal is the main determinant of RFID tag range. So in actual fact, the three ranges are used for different types of applications.

LF RFID tags typically operate between 125 and 134 kHz (depending on the application and country where these are being used), and they are usually passive tags. Common applications include livestock identification, where the tags can be well encapsulated to protect them and work for many years. They are also used for identification of pets where the tags are inserted into the body (we often refer to this as “microchipped” or “chipped”). LF tags are ideal for these applications as they can be easily read through the animals’ bodies as the radio waves are not absorbed by water. Read range is generally very small as they are usually powered and read using magnetic coupling, unlike HF and UHF tags. Other applications are access control, where again the range is very small to ensure that the person is in close proximity to the reader before the door is unlocked.

The high frequency band for RFID spans from 3-30MHz, but the most common type of HF RFID tags operate at 13.56MHz. One particular implementation is called NFC (Near Field Communications) which is a protocol that is approved by the International Organisation of Standards, or ISO, the specific standards are ISO 14443 and ISO 18000-3. Being approved as a global communication standard and operating only on one frequency makes NFC easily adaptable for hundreds of applications.

NFC is the technology in our contactless bank cards and in smartphones that allow us to use mobile wallets, e.g. Apple Pay, Google Pay, Samsung Pay etc.. The availability of NFC in the majority of smartphones means that the type of applications for this technology is growing. Read range is designed intentionally to be short, for security reasons (no chance of man-in-the-middle attacks) and this also reduces power requirements.

There is a lot of interest in extending the use of this technology since a high proportion of the population has a reader in their pockets – their smartphone! There have been announcements about using NFC for keyless entry for hospitality and cars. And an increasing number of marketing trials using NFC for consumer engagement, where the variety of use cases is huge – authentication, provenance, loyalty, re-ordering, recycling and others. In these applications, the information stored on the actual tag can be minimal, with the software in the cloud providing dynamic information to the consumer based on their sales cycle (pre or post sale), location(region/country) and other factors.

The UHF RFID tags usually operate between 860 and 960MHz. The specific frequency used depends on the country. The majority of tags on the market are used for applications like stock control (e.g. retail/pharma or healthcare) or tracking (including airline baggage tracking). In these use cases they have a longer range because they use specially designed readers that have higher power. They also allow reading of multiple items within one location. This is a growing area for RFID tags, with more and more brands and retailers adopting the technology to improve their stock control.

RFID technology has been around for many years and has gone through the usual Gartner Hype Cycle, but it is now definitely climbing its “slope of enlightenment” with 15Bn passive UHF tags being sold in 2019 mainly into apparel. The potential market for the technology is still orders of magnitude greater – one small segment of the FMCG market, carbonated soft drinks gets through hundreds of billions of bottles per year. RFID would be a good solution to help the deposit return schemes that are being discussed. Then there are the over the counter and prescribed medicines that require unique IDs in more and more jurisdictions, which would benefit from having authentication, as well as for integration with new digital home care apps to improve adherence. The adoption of RFID into these extended market segments has been hindered by the high cost of the present solutions. Which is where PragmatIC’s novel ultra-low cost flexible integrated circuits (FlexICs) are reinventing RFID for mass market applications.