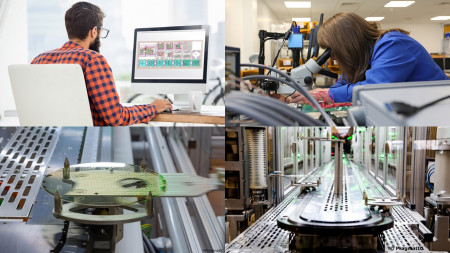 Why is it such an exciting time to be working in IC manufacturing?

Integrated circuits (ICs) are a fundamental part of our lives, but most people know little about how they are actually made. Ken Williamson, Chief Operating Officer at PragmatIC, shares why he finds IC manufacturing so fascinating and why being part of PragmatIC has renewed his love for the semiconductor industry.

How are ICs traditionally manufactured?

IC manufacturing is mature and continues to evolve – which seems like a contradiction but isn’t. It is a mature industry by definition of time. Wikipedia has it dating back to 1960, claiming that fabrication of semiconductor materials became “viable” after MOSFETS were invented by Atalla and Kahng in Bell Labs in 1959 and Kilby had invented the first IC in 1958. Yet it continues to evolve, enabling the complexity of ICs to increase as the ability to manufacture smaller and smaller devices has advanced. To put it into context we have moved from manufacturing with feature sizes of approximately 10um in 1971, to 5nm in 2020, which is a reduction of 2,000 times. The basic principles of traditional IC manufacture are the same though. A perfect crystal of silicon is grown and sliced into thin wafers, then they go through an iterative process including material deposition, etching, lithography. Then the finished IC is passed on to be assembled into new smartphones, TVs, cars etc. (Image courtesy of ASML).

How has the IC industry changed?

The equipment required to make these increasingly complex ICs has become very sophisticated and commensurately expensive, which has led to concentrating manufacturing in a small number of companies. IC Insights notes that since 2009 over 100 semiconductor manufacturing plants have closed or been repurposed, and in 2019 the largest manufacturer of all, TSMC, was the only one that managed to increase its revenue per wafer, mainly because it is the most successful at riding the new technology waves. TSMC and the remaining manufacturers run mega fabs, the latest of which are the equivalent in size to tens of football fields and cost almost $20B to build. And as feature sizes shrink, manufacturing and test costs rise, so cost efficiency is the #1 priority for all fabs. With process and material costs making up around 45% of a highly automated wafer fab, the focus is on working these to the max. This means that the main tasks for those running the fabs are maximising equipment uptime/utilisation and squeezing the last bit of yield out of each step of the process. Staff roles have become very specialist, focusing on a section of a process, making incremental shifts and advances.

What’s so different about working at PragmatIC?

The exciting thing about working at PragmatIC is being able to see the whole picture, rather than zooming into a very targeted area. Our novel flexible integrated circuits (FlexICs) are manufactured in our FlexLogIC fab-in-a-box manufacturing system that takes up less than 1/20th of a football pitch and costs orders of magnitude less than traditional silicon fabs. We have a small process team who work closely with R&D to accelerate learnings and improvements. Staff like myself with a silicon background brought with us specialist skills, but we can now work across much more of the process than we did in our previous roles. Our teams also benefit from the fact that our FlexLogIC cycle times are under a week from tape-out to completed wafer test data, compared to 18-26 weeks for silicon. This transforms our ability to iterate and generates a highly dynamic and creative work environment.

Even during these challenging times, our teams are continuing to work, some remotely, others at safe distances in our manufacturing facility, to optimise the FlexIC Foundry tools and processes. We are determined to cram the learnings from the last 60+ years of silicon into just a few years and bring our goal of a trillion FlexICs in the market to reality.